Even with quality insulation and sensible building design, we still have to heat or cool buildings. Solar heating is the most obvious way of providing some of this energy.

Solar panel heating on all south facing roofs can make up a half of domestic heating, even if the heat provided is not enough to heat water for use. It reduces the amount of energy required from other sources. This free heat is not being used for any other good purpose, and the capital outlay is not very large. 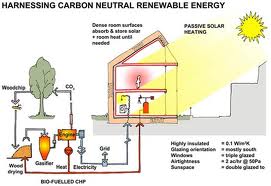 Combined Heat & Power plants are more efficient than generating electricity centrally since the steam is put to use to heat the buildings they are near. Big isolated power stations have to let this heat go – which is about a third of the energy that would have been available in the fuel. The size of the electric generator means it is only worthwhile for buildings around the size of 10 average residential houses. Since we usually build residential houses in blocks this big anyway, this could be repeated in most towns and villages.

Using heat pumps, especially by designing them into any construction appropriate cuts another third off the demand, as the energy is used to move the heat in the surroundings into the water rather than just heat the water. It results in a big saving, even when the surroundings are much colder than the water. It is like the way a fridge works, only in reverse. It uses electrical energy to remove heat in the air of your fridge and radiate it out the back.

Wood ought to be used where possible for heating and cooking, since we are going to need heat and cooking anyway, whatever happens. It is carbon neutral to burn wood, provided the wood is re-grown. However, wood burning on a large scale is not sustainable unless there are huge forests, and most countries do not have the land capacity to waste land on growing firewood. However, in a lot of areas there used to be forest, and there can be a large ecosystem and even micro-climate benefit in growing new forests.

Some industrial processes need power. Rather than provide this power from fossil fuels, we must attempt to source this power through other means. Rather than accept all the energy demand from current preferences, we ought to manage our energy demand such that only the processes that really need a lot of power get it. Space and water heating, cooking and transportation can be changed, and can be sourced by other means. Industrial processes, such as the conversion of minerals or the making of microchips need large amounts of energy. These can be sourced from and ideally placed near to rivers or strong tides.

The damming and harnessing of rivers has proved popular the world over, but many of these projects silt up. They also damage wide areas and destroy vast ecosystems. These need to be avoided wherever possible. Rivers are huge power sources, but it is important to not interrupt the flow of a river, as it is a natural system. In flow power turbines can generate respectable amounts of electrical energy. Rather than hook them up to expensive national grids, it would be more efficient to use this energy locally, moving the demand next to the supply. If the intent is to use the motive power (such as driveshafts for machinery), it is more efficient to take the water turbine energy direct, without converting to electricity and back – as in old watermills.

For areas like the British Isles and Denmark wind is a natural but underused asset. 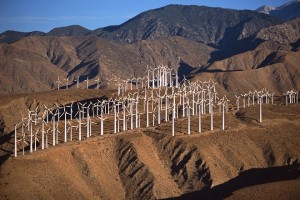 The most wind-exposed parts of the world are far away from urban centres and are sometimes cold. Thus these are small settlements and the provision of electric power comes at a high cost. These areas are perfect for the supplying of energy from wind.

The intermittency of wind means that the energy isn’t necessarily in demand exactly when it is supplied. Technological means of storing the excess for later has yet to be researched thoroughly. Water reservoirs with turbines for pumping and taking power are relatively simple hydraulic power reservoirs which could be used in some cases. They can have multiple uses, such as a pleasant view, fish for food and water provision.

The chief reason why wind power is not a heavily publicised energy form is that for the last 200 years humans have been leaving the land and choosing to dwell in cities. Thus energy concentration is the most popular form of energy, and what do the biggest investors do with their wind money? They build large and expensive arrays to provide electricity for the national grid, and then lose a lot of the power in transmission. The capital model for wind investment encourages large amounts of money, concentrations of turbines and concentrations of power, just like the oil, gas and coal power stations. Ironically, planning permission and local community interest discourages dispersed turbines, instead they drive investment towards big schemes in remote areas, as there is less resistance. It is understandable why communities are not interested in wind arrays, as they are largely owned by private firms with little interest in the community. In Denmark, the business model for wind generation is that the investment is local. Each community own their own turbines and earn an income from them. Every windy area needs to be allowed to do the same, either providing its own power or selling it for an income. This way the community owns the costs and the benefits of their own turbines.

Human settlement patterns were once a lot more dispersed and will be again as by and large the earth can support our populations better if we are more spread out. Wind is a widely dispersed energy provider and it is basically free, all we have to do is get our demand to follow the supply, then we can take advantage of our windy islands.