Micro wind turbines are not designed for houses 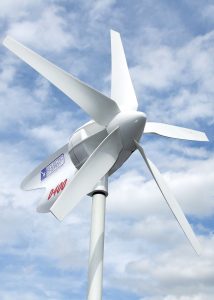 The D400 micro wind turbine (shown in the picture) has been on the market for a little over ten years and is widely acknowledged as the quietest, most productive and best engineered wind turbine of its size. The D400 is primarily designed to be fitted to yachts to charge batteries used to power important on board equipment such as navigational and weather instruments and the VHF radio.

The five bladed rotor is 1.1 meters in diameter and is designed to be efficient at transforming the energy in the wind into rotary power to turn the generator.

Since yachtsmen tend to be frugal with their electricity consumption (half a kilowatt really is a lot of power to the average yachtsman), and because wind speeds at sea are generally at least 10 knots (and for a significant proportion of the time at least 20 knots) D400 can generate a significant amount of the electrical power required on a yacht.

However, the D400 micro wind turbine (and other similar micro wind turbines) is not generally useful on land. Due to the small size of its rotor the D400 requires a much higher wind speed than is usually found on land for it to generate electricity.

Because the mean average wind speeds are much lower onshore than at sea, onshore wind turbines need much larger rotors in order to gather enough wind energy to drive the generator.

Also, because most UK homes consume much more electricity than the average yacht, the amount of electricity generated by D400 is insignificant to the electrical consumption of the home.

Transition Worcester is currently planning to build their own wind turbine. More information can be found by clicking on the image below. 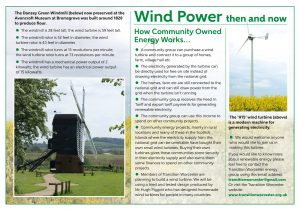