**Help Worcestershire County Council to declare a Climate Emergency on the 16th May!**

There are a number of ways that members of Transition Towns and other sympathetic groups can help get this motion through:

1. Spreading the word to other groups in your area with similar aims/interests (FOE, W.I.s, University Student groups, and any other local sympathetic groups,) to ask them to join with us in supporting the following actions.

2. Encouraging all our members and contacts to contact County Councillors from their own ward and also to specifically contact Tony Miller (Cabinet Member for the Environment) TMiller2@worcestershire.gov.uk and Simon Geraghty (Leader of the Council) SGeraghty@worcestershire.gov.uk to persuade them to direct their Party members to support the motion.

3. Persuade as many people as possible to join us outside County Hall from 8.30 a.m on Thursday 16th May for good humoured, peaceful but attention grabbing demonstrations. Fancy dress, Samba bands, aerial photos taken by drones… All suggestions gratefully received. 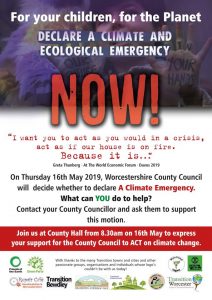